Changing by the Halloween Event

In the end of October 2021, HENNGE held a company internal Halloween event. Until the Covid-19 pandemic, HENNGE hosted a Halloween Party in the office every year, and this year, HENNGE has transformed the event to an on-line costume competition. Here is a report made by Yano of PR Section, who has just joined the company this year.

What is your impression on the work environment claimed to be as cozy and relaxed? When I searched on these words in Japanese "at home na shokuba", the following associated words were returned in Japanese; "ground mine (jirai)", "not my cup of tea (nigate)", "not comfortable (najimenai)", and so on...

In late October, a notice was posted in the slack #official channel, to which all HENNGE employees have access.

"Virtual Halloween Costume Contest"
"Send your Zoom screenshot in costume with a title. Three winners will be determined by employees' votes".

The notice was made by Miguel-san of the Internal Relations and Communication Section (IRC), which is the organization in charge of enhancement of company internal communication and company events.

As I was thinking, "It is impressive that a company hosts a Halloween event with its employees", "what is the IRC?", my eyes suddenly got glued on the following part.

I was a secret admirer of the AirPods as many of my colleagues used them. Therefore, I thought, "I have to have it!!" "Since I work for the PR section, I believe it is my mission to cover the event!", and decided to participate in it on the spot.

(As for the Ring Fit for the first prize, I already bought it since I wanted to lose weight and get fit. *And I have ditched it, it has been a few months already).

So I made up my mind, then, I had to pick the costume.
I wanted to disguise as someone known by everybody at HENNGE, so I chose the "Kimono Guy (Ninja Version)" as I happened to have reported on the HENNGE anti-COVID measures and he is popular at HENNGE as the company internal anti-Covid campaign character.

(secret promotion) This character was created by HENNGE design team, taking Ogura-san, who is the Representative Director, Chief Executive Officer, as a model. HENNGE gives these stickers to employees who completed the vaccines twice.

I ran to one of the 100-yen discount stores and bought some pieces of cloth and felted fabric. I cut the cloth into half and covered my head and my mouth. I cut the felted fabric as well to let my neck and head out and it became a costume. In a matter of five minutes, I turned myself into a Ninja. I selected the sticker image as my zoom background and applied for the contest using the Google form.

■Did the Ninja win the AirPods?

After I made my application, I have been dreaming myself of having the AirPods with me at the meetings and kept praying that I would win. In the meantime, the number of my fellow competitors (applicants) was gradually increasing.
A few days have passed and the voting has started.

There were 21 entries. There were a lot of original pieces, such as No-Face of the movie, "Spirited Away", remotely working from home, reproduction of one of the famous scenes from "Squid Game", a very popular Korean drama series, and jamiroquai singing Virtual Insanity (I wish a video version was available). There were also creepy pieces for the Halloween and cute ones with children.

As I voted, I was overwhelmed by the quality of entries and I could not help smiling as I discovered my colleagues' tastes and senses of humor which we don't normally see at work.

And on November 2, 2021. The results were announced. There was a notification sound from the slack. I opened the #official channel.

Drum roll please!
The results were...

I did not get the AirPods, I was not even nominated!!!

Was I too shy and not bold enough? Perhaps I should have made it more funny. I secretly voted to myself, what a shame!

Well, I can make a lot of excuses, but let's be professional and I would like to present three winners as a PR staff.

The third prize went to Jeanie-san of the Cloud Product Development Division. The title was "Amabie says 'Avoid the 3Cs!"

I have seen a lot of disguises as Amabie but this was probably the best one. I could have a nightmare.
Jeanie-san's prize was dinner or horseback riding for two.

Jeanie-san's comments:
"I was so happy to win one of the prizes in our Halloween costume contest! I didn't expect it - I was just happy to have an opportunity to dress up and do something silly. It was nice to see not only the work people put into their costumes, but see the different ways people approached the competition challenge. I chose Amabie because I thought it was something that could relate the struggles of our last couple years with the Halloween-relevant Japanese culture of yokai!"

The second prize went to Yejin-san of the Corporate Communication Division.
The title was "A person who pretends to listen while secretly playing on her phone"

It is the so-called "Jimi Halloween'' (mundane Halloween) which is getting popular these years. The smartphone screen reflected on her eye glasses creeps up on you. Yejin-san won the AirPods Pro.

Yejin-san's Comments
"I didn't expect to win at all haha I didn't even vote for myself because all the other ideas were so brilliantly creative! Since we haven't seen each other in the office for a very long time, I've always been wondering if everyone is doing okay:) Now I am happy that everyone looks as lively and cheerful as the last time I've seen them in real life".

And the grand prize winner was Jazman-san of the People Division.
The title was "Pikotaro forgot his passwords".

It is an interesting piece, linking the HENNGE TV commercial advertisement presented by Mai Shiraishi, Pikotaro who is famous for the PPAP (pen-pineapple-apple-pen) song, and HENNGE One Solution to resolve the PPAP issue.
Jazman-san's prizes were the Nintendo Switch and Ring Fit.

Jazman-san's Comment:
"Honestly I did not expect to win the grand prize. I am glad that I participated. In the photo, I disguised as Pikotaro who forgot the password, just like Ms Shiraishi in the commercial. As HENNGE One resolves the issues related to PPAP, I chose Pikotaro who is famous for the PPAP song.
It was my first time to participate in such a fun contest since I started to work for HENNGE in 2018, and it was great to see the creative sides of my colleagues".

What is the Internal Relations and Communication Section (IRC) and why did they organize such an event? I interviewed Kenny-san and Miguel-san of the IRC.

IRC engages in various activities to enhance HENNGE employee engagement, communication, and collaboration. For example, we host the "HENNGE ALL Hands'' which is an event participated by all employees to learn about the company's vision and each organization's activities, organize employee surveys to visualize the organizational challenges and their solutions, and the "fun donut", which is a weekly random socializing event for the employees. 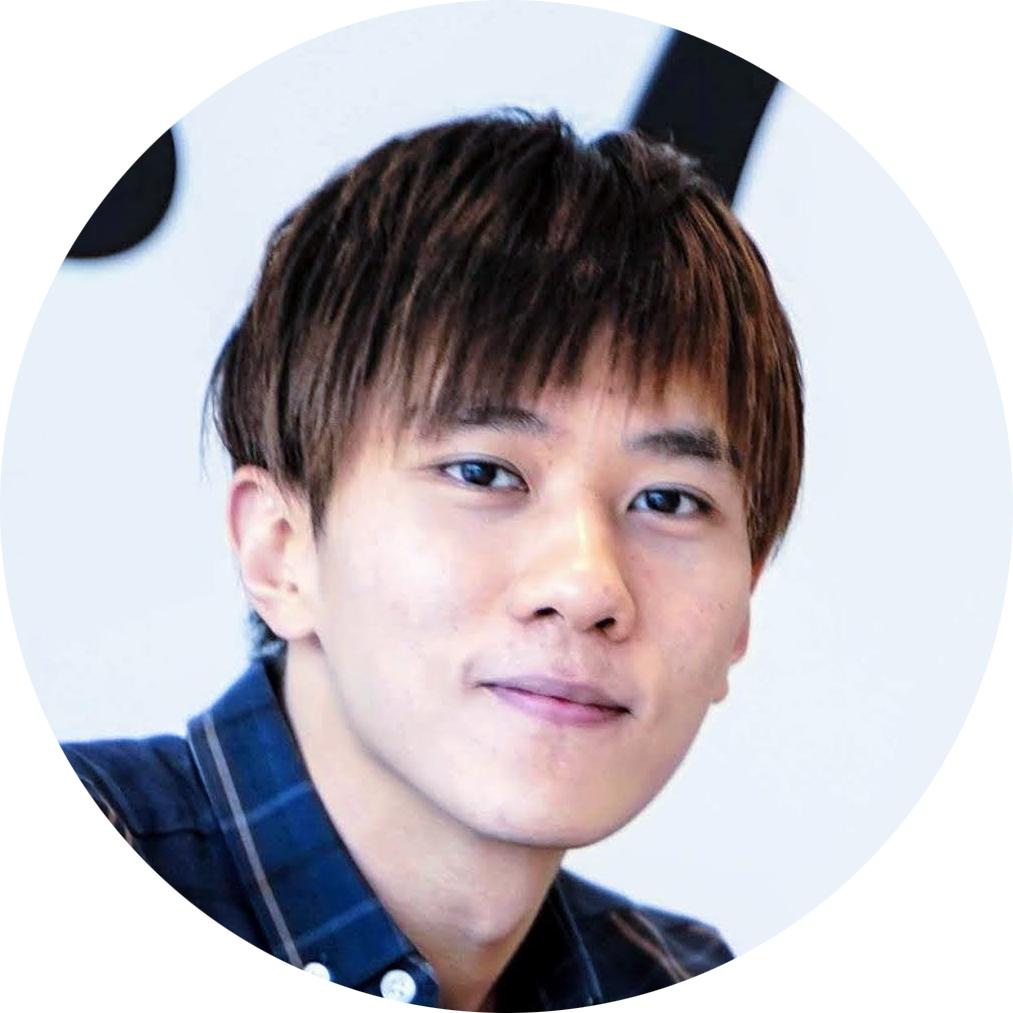 About the HENNGE Halloween event, the IRC has been organizing it every year during the past few years. We invited employees and their family members to the office and enjoyed food and games. However last year, because of the Covid-19 pandemic, we had to abandon company-wide events.

For the Halloween event this year, we wanted to bring the fun atmosphere back which we enjoyed at HENNGE before the pandemic. We have been working remotely for more than a year and we tend to get tired, feel lonely and isolated. We believed that now was the time to bring the employees together and create excitement. As a result, we had 21 of the funniest and the most creative entries and 132 employees' votes.

IRC did not want HENNGE employees to remain disappointed and depressed as various events had been canceled due to the pandemic and wished to bring the employees together the way they could under the status quo. And it seems that employees have welcomed and supported the IRC's idea by participating in the event.

My colleagues at HENNGE are friendly and interesting people and we can have fun together but it is hard to know such sides of them at work. Through such events as the Halloween Costume Contest, we get closer by discovering such unknown sides of our colleagues. We hope that it will bring us closer and help us work more openly and efficiently together.

What I feel through our efforts is that the IRC activities and events are possible because we are at HENNGE. The reason why the Halloween Costume Contest ended in success was thanks to the open culture of HENNGE where we can organize such all-employee events and to the employees who are cooperative and who appreciate such events. It is great indeed to work with such people in such an environment.

I felt exactly the same way as Kenny-san did as I participated in the event, that HENNGE is blessed with an open culture and cooperative employees.

For example, there were people who urged me to participate in the event when I did not know what to do for the first time. There were also people who introduced me to other people as "Yano-san who disguised as the Kimono Guy" since I am a newcomer at HENNGE and I am not known in the company very much yet. And there were members at the IRC who organized and hosted the event for the employees. And those who actively participated in the contest, and those who voted and reacted to the slack posting to support the event...

Throughout the event, regardless of the organization we belong to, our nationality, our career or job title in the company, I felt that everybody was enjoying the event and wanted to be creative. It may be also related to the unique fact that about 20 percent of HENNGE employees are internationally hired people. I felt that THIS IS a cozy and relaxed work environment and it is nice to work here.

I did not win the AirPods but this Halloween event dramatically shifted my impression on the "cozy and relaxed work environment" to a positive one. It would be great if I search on the word "cozy and relaxed work environment" on the Internet one day, the name of HENNGE, among others, would appear. I would like to keep promoting HENNGE as one of the greatest companies to work for as its PR staff.